February 2017 For many years, agent systems have been investigated as a design paradigm and as an implementation technology. As a result, a large number of agent-based control architectures have been developed which benefit from the advantages of the agent systems to deal with existing problems in factory automation. These efforts are documented, for example, in VDI Guidelines 2653- "Agent Systems in Automation Technology" and in publications such as “Agentensysteme in der Automatisierungstechnik (Agent Systems in Automation Technology)“ von P. Göhner (Editor)  by P. Göhner (Editor) and “Industrial Agents: Emerging Applications of Software Agents in Industry“  von P. Leitão und S. Karnouskos, to which the IAF has contributed. In the last 3 years, the IAF has taken a further step (in this case in particular through the work of Dipl.-Ing. Daria Ryashentseva).

The starting point of the work were the questions concerning the flexibility of production systems addressed to the industry 4.0. Each production system component should adapt itself to the changing environmental conditions and manufacturing requirements and accordingly optimized carry out the production processes. However, this can not be achieved with the existing automation structures.

As a special challenge could be identified:

The Supervisory Control Theory, developed by Ramadge and Wonham, could be identified as a useful basis for implementing an extension of existing control architectures. This postulates the existence of a controlled system in the sense of a closed control circuit whose behavior is restricted by a supervisor or adapted to the changesof requirements. The structure shown in Figure 2 can be applied to various levels of automation pyramid. It differs only regarding the information used for control decisions and their influence on the controlled system.

Looking at the field level, the need for adaptation of a controlled system refers to the process to be executed/ carried out (in the case of factory automation, the production process within a resource). Here, the process parameters must be adapted to the process necessary to produce the product. 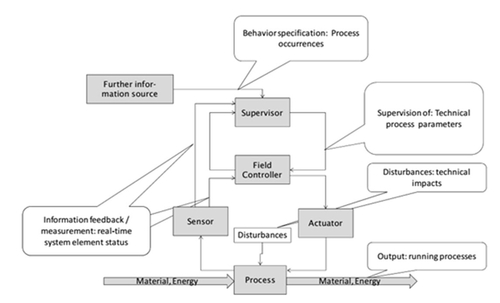 The MES or ERP level, on the other hand, deals with the organizational structure of the interaction of the various resources in the production system. This must be adapted to the production process sequence required for the product.

To implement this supervisor architecture, Ms. Ryashentseva has developed an architecture which is based on five agents, shown in Figure 3. 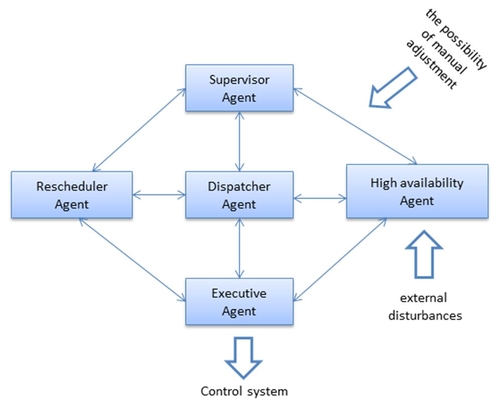 It consists of the following agents:

In the case of three applications, Ms. Ryashentseva proves the advantages of the control architecture in her dissertation "Agents and SCT based self * control architecture for production systems". One of the examples relates to a laboratory facility located at the IAF. For this, the agent architecture shown in Figure 4 has been implemented. 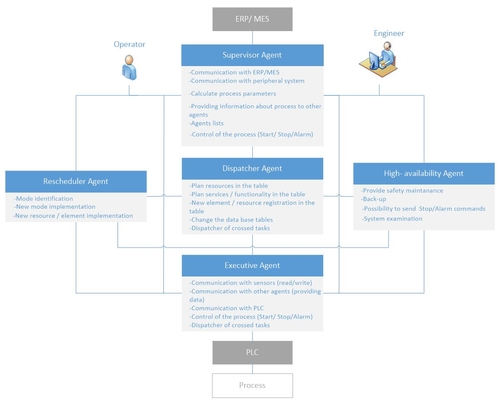 Figure 4: Realisation of the Example

With the control architecture developed by Ms Ryashentseva at the IAF, the necessary flexibility of production systems, as sought in industry 4.0, can be addressed. The five developed agents can be viewed as a possible realization for a management layer of an industry 4.0 component.

The architectures developed during the promotion of Ms. Ryashentseva is currently being implemented by the IAF in the revision of the VDI Directive 2653. Here, in particular, (well-)known fields of application of agent-based controlling and the resulted design patterns  are relevant, which are currently being developed at the IAF.